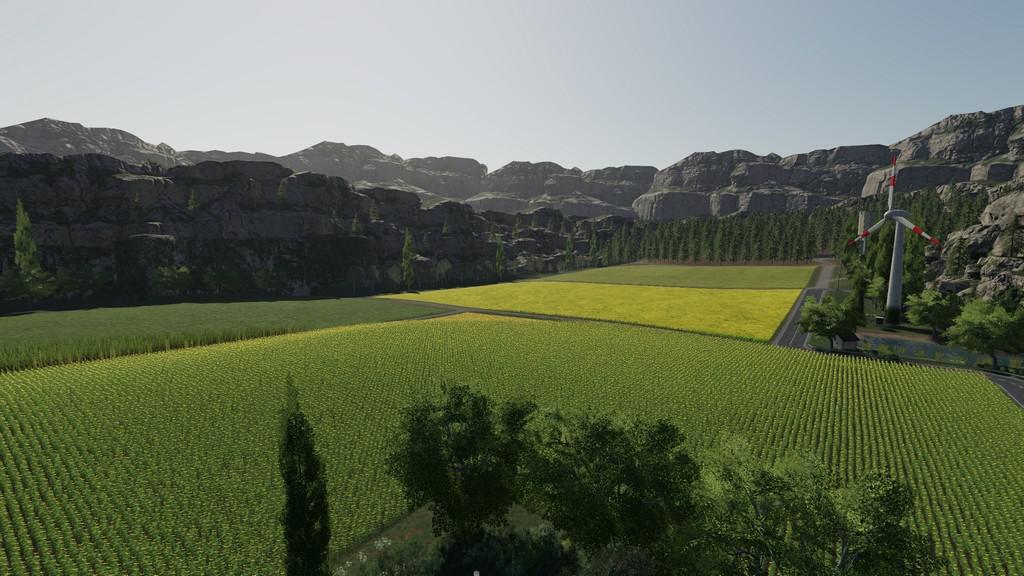 From the desire to craft a small development and test map for modding, Minibrunn has emerged: a 50ha large map with all FS19 features.

As a special feature, a green floor is built in to create store photos that can be painted using the Landscaping Tool. In the shop there is also a green wall (without collision), which can be placed to create a green box. The vehicle dealer has an extra ramp for presentation purposes (screen shots)

But even those who only want to be a farmer are in good hands here. The map offers five fields, four can be combined to form a 10 ha huge one. The forester manager is also taken care of. To the west of the map is a forest area that offers many trees for cutting down. The operation of a BGA is possible.

The terrain is surrounded by a mountain range. The only access road is unfortunately blocked by a landslide. Fortunately, there is you as the supplier of idyllic Minibrunn. So, what are you waiting for? Have fun!

Features:
– greenbox by soil texture and placeable wall
– 5 fields between 1 and 2.5 ha
– forest areas with about 7 ha
– biogas plant
– 6 outlets for all standard fruits
– with or without courtyard buildings and vehicles (depending on the level of difficulty)
– AI-pedestrian and -traffic
– two waterholes
– a lime silo
– mission system (including transport orders)
– livestock is not permanently installed

Changelog
V2.2.0.0
-pre-built farm now on all difficulty levels (can be sold completely)
-curbs and fences on the courtyard can now be sold (but they cant be rebought)
-fixed wrong road markings
-new balloon texture added
-fixed floating objects at the machine dealer
-removed sugarcane stains from the farm (only active with new game, otherwise just paint over with landscaping)
-position of the shop icon moved into the building
-fixed decoration tree trunks roll onto the street
-repainted some of the buildings
-(hopefully) fixed problems with the water at the pond (PS4)
-removed all unnecessary cameras from the map
-minor cosmetic fixes
-Seasons: added settings for consoles
-Seasons: fixed missing snow on the rock at the BGA
-Seasons: added snowmen
-Seasons: added some snow roofs
-Seasons: snowmask revised (only active with new game)
-Seasons: fixed season masking for some objects