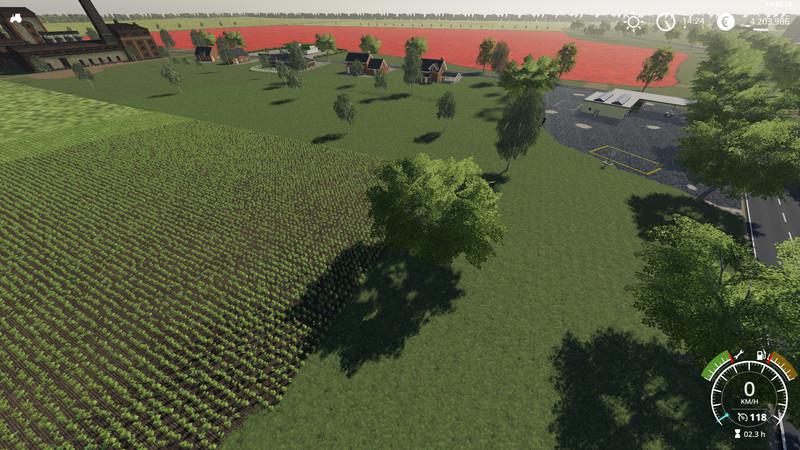 The original mapper of this map is LF-Bauer. He had already invested a lot of effort and diligence in this map in 2014, and although there were several cards with this name, in my view, this card is the best of them all.

Since I had to adjust the soil at the feed store of pigs, theoretically a new score would be necessary. To save you, there is an extra download of a single file.

Please unpack the zip-file and copy the included file into your savegame. Just overwrite the existing file.
However, for all those who have worked on the ground itself at one or more places in the map, this variant is not recommended, since the exchange of the file your own changes are lost.

The basis for this is the Multimap for the LS 15 and LS17. The version for the LS15 but never found its way into the public, but was kept private by LF-Bauer. Finally, I was asked by him to get the card in the LS17. Now she arrived in the LS19.

Here again the “technical data”:
• 4-fold map with multifruit and 42 fields.
• 1 yard
• 2 skin silos for cereals and feed, as well as for earth fruits
• Extra storage in the yard for fertilizer, seeds and lime
• Many outlets
• Traffic

Clover can be mowed, the resulting clover can be fed or used in the BGA for silage production.
At this point, my special thanks go to GMCW, zero_ace and dondiego00 for releasing their fruits for incorporation into the Multimap.

Road, terrain and almost all old objects were taken 1: 1. For players who play in the level Farmer, at the start of the game all silos and stables are already available. Players in the MP I recommend to make a Savegame in SP and use this for MP. Ultimately, of course, the decision is up to you.

There are open spaces to place mods.

All old production sites are present on the map and will be reactivated as soon as the Global Company (successor of the factory script) has been released. Until then, all unloading points, which are related to productions, are blocked by barriers. For this you will find on their premises temporary outlets, which will be removed later. These interim sales points will recognize you at the ramps for unloading.

We have put a lot of effort and work into this card, it has been extensively tested extensively in the SP and MP over several weeks. The log is clean, the card runs smoothly in both the SP and MP. Should errors still occur, then please install the latest patch 1.3 from Giants and / or clean up the mod folder.

The zip file needs to be unzipped, as there are still harvesters for harvesting cabbage, both onions and carrots. These mods are intended to be only a temporary solution until a suitable mod appears, which makes the individual machines superfluous.

Version 2.2
FarmlandId’s productions corrected.
Stable is now also available for sale separately
Pallet spreader turned at the sawmill paper (paper only)
Palettenspawner turned completely in the case of the filling of food (pallets are now transversely)
at the mill rye added as a raw material
corrected several floating trees compared to field 3
Several goals set to automatic opening. (Mod is required -> HoT Animated Object Extend) concerns gates at the yard, LC, underfloor yard, weaving, chicken farm
Trigger egg trays for liquid egg production corrected again
Fermenters now accept straw and bales (grass and straw)
Trigger LC extended to discharge at Hall 1 and 2. This allows you to unload now with the cooling trailer from the Kamaz pack.
As a deco driving forklift installed (as on Saxonia). Commutes on the LC between Hall 1 and 2
Cotton can now be harvested with a thresher (maize header). This allows you to deliver the cotton as bulk material in the weaving. Cotton bales are now accepted as well.
Corrected sounds
Invisible objects removed at the BGA
Jump points farmhouse, gas station at Edeka and weaving sales corrected
Another important note. Again and again we had the problem on the MM that after a certain time in the game (usually after several matchdays) the following error message appeared:

I’ve found out that this error always occurs when the PC farmer puts a fruit into the game, which should not be grown, that is, where the missions are disabled. This is obviously a bug of Giants and does not just affect our maps.

Version 2.0
– all productions are reactivated
– Removed temporary outlets and barriers

Version 1.1
– fixed wrong opening goal
– Grass can now be drawn in the game
– BGA in all levels now available
– Feed storage for bills, horses and sheep in all levels available and available in the shop
– Fixed feed swine terrain, trigger was below the ground, added straw and pig feed
– Double gates at the sheepfold have been exchanged, now have to be opened manually (does not affect the main gate)
– Adjusted soil price per hectare to official average price in Germany. As of 2017