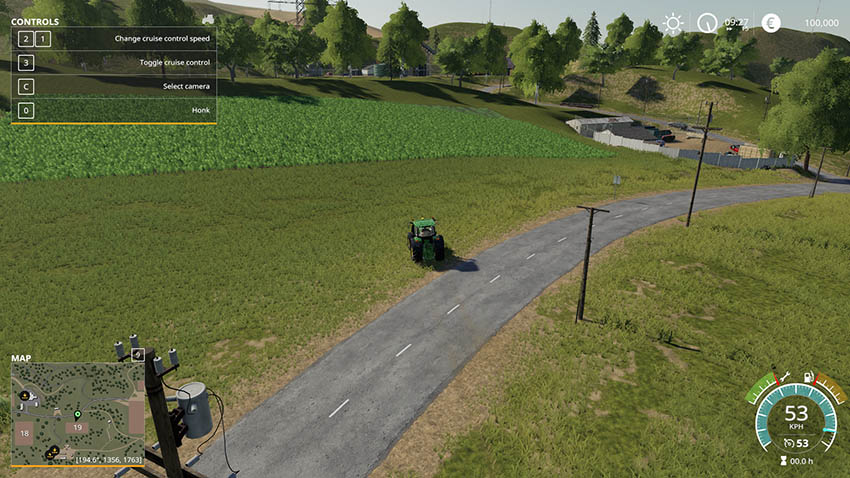 Yogiport is a modified Ravenport map with generous open spaces for yard construction and modified buildings.

Under Videos you will find the map presentation in which the changes are presented:
The following fields have been merged: 1 + 2, 20 + 21, 24 + 25 + 26
Fields 12 + 13 cleared as open space for the yard and a grass meadow, terrain leveled
Additional trees planted for the timber industry in the northeast
Various modified buildings installed, functionalities see description in the shop or moddesc / xml in the building Mod
Start fields 6 + 7 reworked, field 6 empty and field 7 defined with harvest ripe wheat
Around the yard sown abundant grass for mowing
Price display for mixed ration, chopped meat, pig feed and digestate inserted
Card prepared for the special cutting units of the Krone Pack OY
Point of sale at the dairy for products that are nowhere or rarely accepted:
manure forage chaff silage straw grass_windrow dryGrass_windrow digestate liquidManure pigFood
All bushes and various decorative objects removed
Collisions on street signs removed, so that they can not fly around
Additional light in the BGA

The rar file must be unpacked and contains mod files, all of which must be inserted into the mods folder, since there are other, modified buildings in addition to the map.

Version 19.12 (mp)
– There is no need to start a new game from version 19.11. This 19.12 is the final version of Yogiport
– Trailers (bulk), trainwagon and transporter (augerwagon) now load all solids of this map
– Hofsilo now accepts all substances (including liquids) of this card
– Further patch 1.40 fixes, the following warnings remain and must be handled by Giants:
WARNING: performing emergency garbage collection pass (proof imho utter nonsense, Giants thinks it’s great)
Warning (physics): Non-cpu collision mesh for ‘horse_main_component1’ is being cooked at runtime (Only if you own a horse)
– Revised sales outlets
– Plan and effects revised
– And as always: Fixed a lot of little things that would blow up this listing …

Version 19.13 (mp)
– NO new game has to be started with a savegame version 19.12
– Capacity egg carton now 1,000 instead of 150 eggs
– Capacity wool pallet now 10,000 instead of 1,000 liters
– millet straw swath corrected
– corrected various particles and effects (herbicide, tobacco, coleslaw)
– Coleslaw pipe effect corrected
– Hofsilo load trigger added because of herbicide etc. (Thanks Stefan for bug report)
– And as always: Fixed a lot of little things that would blow up this listing …