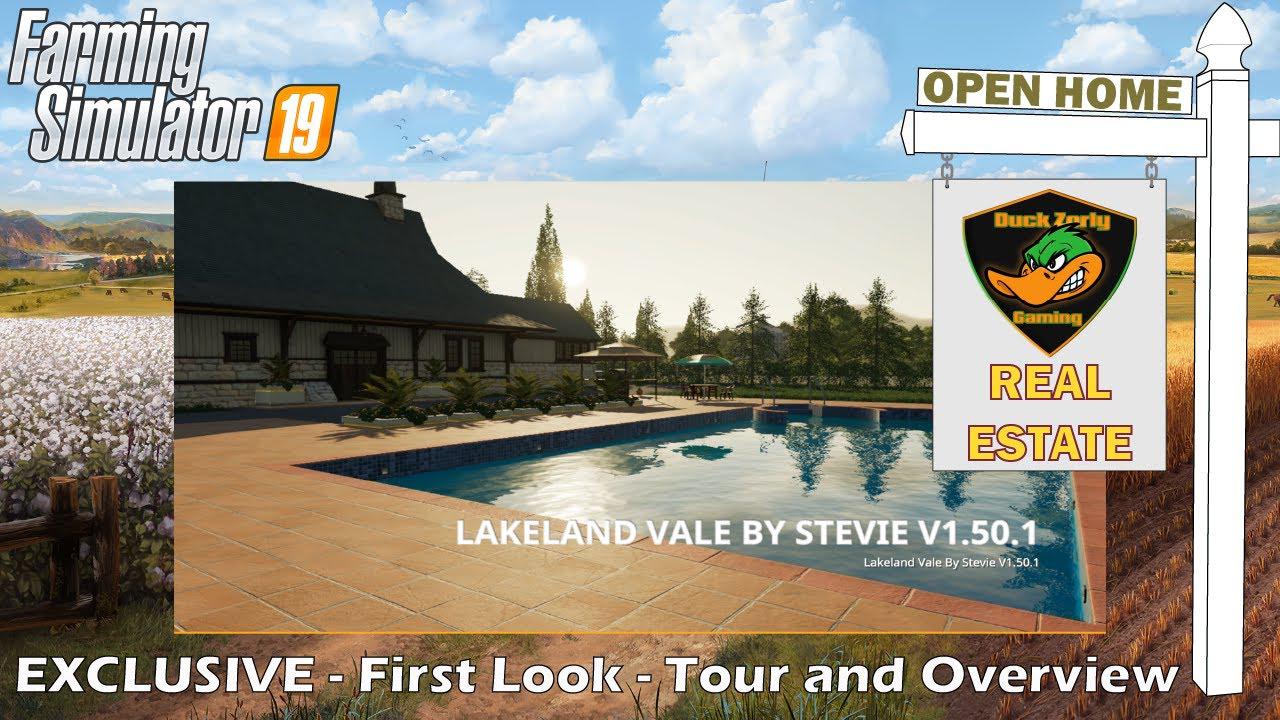 Place the downloaded zip straight into your mods folder, load and play. I offer no support for any external mods used with this map other than my own.

The aim was to create a laid back easy to just play and relax hassle free map. The map at first glance is just this with square fields, easy missions nice fictional US country to have fun and play the game in. However I created the map with painted roads and lanes and just one small traffic spline in the northern small town of Lakeland Vale. This allows the user a huge scope of map customisation using the simple in game terrain tools allowing the users to basically recreate this however they wish. Most of the farm can be removed apart from the animals and house.
The map features one farm with vehicle reset point, sleep trigger, all in game animals in custom pens complete with the Animal Pen Extension APE. The APE mod file is not included and must be downloaded separately from its source. The farm has a large capacity silo, silage clamp, manure store, workshop, diesel supply, vehicle sheds, barn sales, wool sales and farm supply point. You have 5 owned fields 4 planted ready for harvest and 1 grass. The map is seasons ready with snow mask and custom textures. AI friendly with large grass areas at field ends and the BGA has 6 clamps, sunken tip points and fast processing. The map features compost but will require a relevant global company composting plant mod like the one I released and the addition of the Global Company mod script not supplied and must be download from source. The map has a smaller forestry area and several good sized placeable areas. Diesel can be sold at both gas stations, water can be sold at the animal suppliers. Eggs can be sold at the dairy and supermarket. Water can be filled for free from the farms wind pump, horses water trough and dairy water tower.
I have not built in any Global Script productions as you can get placeables and I decided against extra fruit.

Here’s a huge big thank you to Frank, Larry and Duckzorly for help testing the map.

Changelog:
08/05/2020 Switches on extra ground heaps so it should work with some of the new mods on top of using seasons and the straw addon mod all at the same time. Make sure you clean any heaps and windrow up from the ground before switching to this update. Update name remains at 11.
28/04/2020 Also now updated with a fix for the seasons old shed 2 error and increased silage price.

Update 11 adds mud and multiangle terrain to the map.
Unzip the downloaded file and then place the Lakeland Vale zip found inside it into your mods folder. This replaces any previous released version and no more updates are planned and work on Lakeland 2 has now started.

Update 10.
If you wish to keep your current game you must clean up all heaps and swaths before updating to 10. Once updated load the map and save straight away to update the save files. Exit then load up again and play. This worked for me.
Update 10 doubles the tip on ground and fill types in the map, updates the BGA and silo tip points, adds in the new potato types storage and sell point updates, adds the new types to the animals and more. The new Lakeland Vale Global Company Mod Pack has updated 2019 versions of Farmer_Andy’s potato washer and steamer and updated Global Company Icon pack and all my other GC installs.
Have fum with it, stay safe and STFAH.

Adds in connections at the cows, pigs and BGA for the manure system hoses. Fixes an issue with the foliage painting in the landscaping tool. Updates the sheds included with the map. No new game save is required just make a save as soon as you load your current game.

You do not need to start a new game with update 8 if you have update 5, 6 or 7. Simply make a gamesave as soon as the map loads.

Update 8 add the ability to paint down most of the extra foliage in the landscape editor that the map has. So creating your own gardens is easy. Map Boundary tree clip has been reduced and a lot of object clip distance has been adjusted. A map update number is now added to the map base game version at the end on the loading screen.

You do not need to start a new game with update 7 if you have update 5 or 6. Simply make a gamesave as soon as the map loads.

Update 7 mainly makes adjustments to the animals triggers and gates. It does not require a new game starting if you have update 5 or 6.

Update 6 adds herbicide and liquid fertilizer sales into the map and activates them in the economy to be sold at Jeebs. Plus other small updates to the map.

Update 5 adds new distance textures for field crops, has many improvements, adds the fill type Hmilk into the map and economy for use with my Global Company Homogenised Milk machine available in My Global Company Lakeland Vale mod pack linked below.

Adds in several user requested alterations.
Adds the ability to remove road signs, street lights and southern power poles so they are out of the way if the user customizes the map layout. Removal is via the store garage and is permanent. It will leave all the above in key areas of the map.
The maps base color and brightness has been slightly adjusted.
Adds extra detailing and painted foliage to certain areas.
Replaces field 20’s vehicle shed with a removable placeable version.
Clip distance adjusted on the vehicle shed and barns wood panels.
Fixed the flashing sign on the vehicle shop roof.
Land id 63 the roads and boundary is now free to buy.
Several areas of terrain have been smoothed.
Bale triggers have been added to the animals straw triggers.
Support for bale shredders added to the pig straw trigger.
There’s more. Have fun, this is the last update for the map until one is forced.

Here’s small update 3.
This fixes cotton sales at the farms wool trigger. Renames Bga2 and adjusts the horse pen along with a few other minor tweaks. Does not require a restart.
A second download link to a duplicate file is now on my google drive but you must remove .COPY from the end of its name for it to work if you download Lakeland Vale from that link.

Here’s small update 2.
This allows use a some of the placeables from Fenton in Lakeland without showing texture path errors.
Also as requested I added a vehicle store sell trigger at Stevie’s Country Store but to see that you will have to restart the game with a new save. If you can live without the new sell trigger the other fixes/improvements do not require a restart. That’s all issues and tweaks done now guys no more updates for a while.