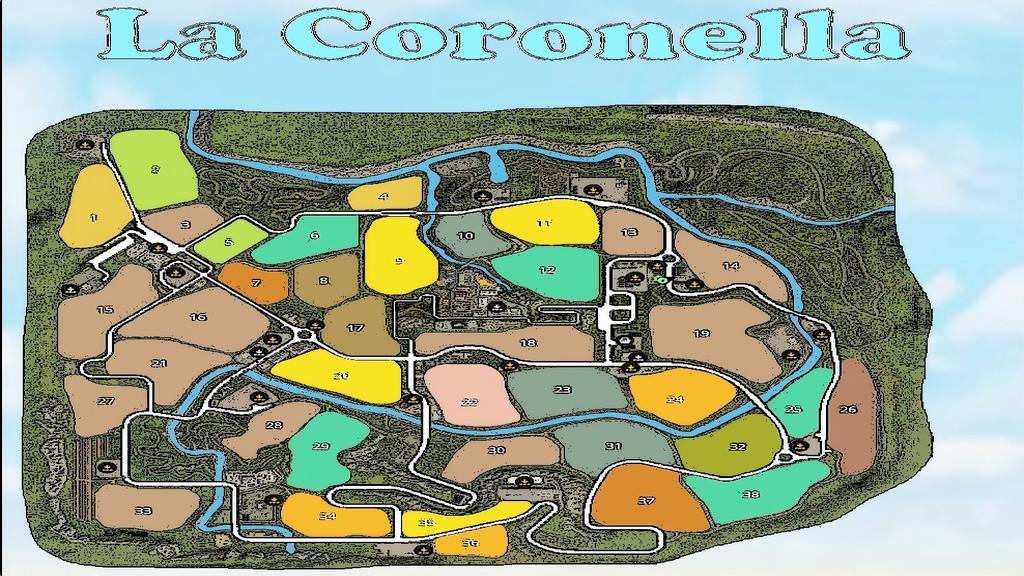 Welcome to La Coronella. This map is a product of the imagination, nothing you find in it is based on a specific place. I hope you enjoy the map and its features.
In La Coronella you will find 2 Predefined Farms, in which you can store all kinds of products, both in silos and bunkers. In both cases, in order to use the silos, you must own the land where they are located, in case of selling said land you cannot use said storage silos.
Enjoy the 2 Biogas plants distributed by the map, 1 Compost Plant, which is obtained from Wood Shavings, Sugar Cane, Straw or Manure, and several forest areas for forestry.
When selling your products you will have to choose from a large number of agricultural stations, some of them for specific products. You will also find silos for the purchase of seeds, fertilizers, etc. Do not forget that these places will have opening and closing hours, as well as the agricultural shop.
As for the animals, you should take a walk on the map and locate the different stables distributed on the map, in order to use them you must own the land where they are located. Buy and sell the different animals in specific places on the map.
You could not miss the transport missions, where you will find several custom.
Finally, enjoy a beautiful landscape, with varied decoration and different animations.
In this version compatible with the mod of the Seasons.
This version, compared to the normal version, only has 2 new crops, Millet and Sorghum, in addition to the Compost. In this version we will not be able to enjoy the productions of Cheese, Sunflower Oil and Flour,
since these work with the animal system and create problems with the mod of the seasons.

Changelog:
Changelog 1.1.0.0:
-The prices of the products produced by the Factory Pack have been adjusted.

Changelog 1.0.5.0:
-The map has been adapted to be used with the Placeable Factories Mod.
-The fumes from the chimneys were eliminated because they were the cause of flashes on consoles.
-The height of the Supermarket point of sale was adjusted.
-The height of some buildings was modified.
-Added animation in the Lake. The water level will rise or fall at certain times of the day.
-The trigger of the production pallets was adjusted to improve their sale.

Changelog 1.0.3.0:
-The height of the Supermarket point of sale was adjusted.
-The intensity and scale of some lights that were included in the farm in the previous version were readjusted.
-The height of some buildings was modified.
-Added animation in the Lake. The water level will rise or fall at certain times of the day.
-Now you can sell the chickpea straw at La Coronella, Fertilan and El Pajar.

Changelog 1.0.2.0:
-It was added the option to be able to buy the unusable area of the map.
-Improved the lighting in the Farm.
-Added new streetlights and spotlights in the Farm.
-Now the products from the factories will sell a little faster.
-Various objects were relocated.
-The Chicken Navigation Mesh was modified.
-The Distribution Center was modified.
-The discharge points of the Supermarket and Distribution Center were adjusted.
-Various textures were redirected to the base game.
-Unused textures have been removed.
-The distance textures of Chickpeas and Lentils have been modified.
-The size of the .zip file under 30Mb.

Changelog 1.0.1.0:
-The map becomes compatible with Seasons Mod, although you will not be able to use the factories, since now I have to configure all the operation of them again,
since the Seasons Mod completely changes the operation of animals.
-The factories are on the map, but they will not work as they should, so I ask you please a little patience while I get them to work correctly.
-Now you will have to choose between Seasons Mod or Straw Harvest, it has been impossible for me to make the map compatible with these 2 mods at the same time without changing anything of the
new products or factories.
-Added Seasons mask.
-The weight of the pallets of the factories has been reduced in order to be able to handle them better with tractors with a loader.
-Remember: The factories, even if they are inside the map, will not work correctly if you play with Seasons Mod, for now, to use the factories you must play without Seasons Mod Activated.
-The use of Geo La Coronella 2.0 is recommended, which adds the new crops included in this map.
-Textures of various buildings were modified.
-Some Winter contracts were included.
-Snow layer added to some buildings.
-A farm house was added.
-Try to have the automatic vehicle start option activated when using the Straw and Hay warehouses. Remember that immediately after starting the
unloading in the area you must enter the warehouse to start the animation and the collection of the product from the floor.
-Removed the possibility of buying unusable land on the map.
-Fixed bug where you couldn’t buy placeable animal stables. Now you can place up to 3 or 4 animal stables. It is not possible to increase
this amount due to the factory system.
-Some decoration objects have been added around the map, especially to the north and east of the map.
-Adjusted various map objects such as rocks, buildings and miscellaneous objects in order to improve the placement of placeable objects within the areas
enabled to do so.
-The chimney smoke animation has been removed because it is suspected of being the cause of the flashes on PS4, if it is the case that these flashes continue to appear,
these fumes will be repositioned in future map updates.
-The start vehicles were modified.
-Even if you don’t use Seasons Mod, surely this update requires a new save.

Welcome to La Coronella 2.0. This map is an improved and expanded version of La Coronella. On this map you can get the most
Farming Simulator 19. The map has undergone important changes with respect to its predecessor, here you can enjoy 2 new crops, El Garbanzo and La Lenteja,
in addition, in the Farm you will be able to use pre-installed silos to store almost all the basic game products and the new ones present here. The map is translated into
English, German, French, Italian, Portuguese and of course in Spanish.

Changelog 1.0.3.0:
– Various floating objects have been removed.
– Fixed some translations.
– The collision of the Pellet bags has been eliminated. These caused conflict and made the pallet disappear.
– The height of the triggers of Biogas and Compost Plants have been adjusted. They were too high.
– The “Lake” animation has been blocked, in order to check if this was what produced the “flashes” on the console.
– The production of pallets in the factories have been adjusted.
– The capacity of pallets has been increased from 1200 liters to 2000 liters.

Changelog 1.0.2.0:
– This is a great update, which is accompanied by many important changes. Important lowering of Slot in Console and the totally modified productions system.
– I am sorry for those who have an advanced game, but to enjoy all these changes and the game not errors, New Game will have to start.
– We say goodbye to the screen freezing produced by the productions.
– The productions of Cheese, Flour and Sunflower Oil have been modified, now each product will be produced on pallets.
– Two new Factories have been added: Production of Laminate Planks and Production of Pellets.
– Now to make Compost we will compact Waste derived from Straw, Manure and Sugar Cane.
– Chip to Compost has been removed.
– New Biomass Bunker, which we will obtain by compacting Chip. We will use the biomass for the production of pellets.
– Now the factories are installed at different points on the map, find the location of each one.
– To use any of the Factories, Greenhouses, Animals and the Biomass Bunker, you must previously buy the land where they are located.
– Rice can now be sold at all grain outlets.
– Timetables have been added to each of the doors of the points of sale, Compost Plant, Biogas Norte Plant and Agricultural Store.
– Some decorative objects and houses have been removed in order to improve the performance of the map, especially on consoles.
– The size of the .zip file of the map will become approximately 300Mb, so it means more than 120mb of download compared to the current version. This should have positive effects on Slots used in console.
– The configuration of the greenhouses that we have to the North of the map has been modified. Before, the amount you entered per hour was very high.
– Traffic has been retouched, especially in curves and junctions, before trucks caused delays due to the turning angle.
– The cow farm and the horse stable have been retouched, in order to reduce the Slot in console.
– Some posters have been relocated.
– Some trees attached to the road have been relocated, making it difficult to pass with machinery.
– Signs of Flour and Sunflower Oil have been placed at the points of sale.
– The Compost and Silage bunkers of both farms have been rebuilt. They should now work properly.
– Access to the Sheep Farm has been modified to improve access to and exit from the site.
– The fences that separated fields 37 and 38 have been removed.
– Decoration items have been removed from both farms due to the change in the production system.
– New translation added: Portuguese