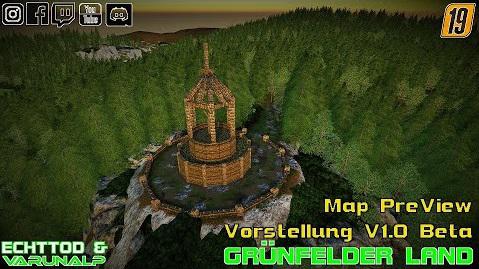 Welcome to the Grünfelder Land!
What we offer: 145 fields, 18 forests, 5 villages and 2 cities. Then you will have a few more productions
Find. Not all productions are installed in the V1 Beta. So be patient and the map versions in mind

If you play the map alone you don’t need to pay attention to anything special.
For the 1.4 a NEW savegame is needed.
From the old savegame in the items.xml you can save only the silo states, the other data like productions + their
Filling volume can be taken along as well as the vehicles, the farms, the farmlands have to be adapted

Version 1.2 beta
* Bug reports have been edited and corrected
* Change the help line in the “ESC menu” (last tab)
* Other productions have been added:
– Acetic acid + urea = crop protection agent
– jam production
– Waterworks to produce water from charcoal or logs
– cigarette factory
– Paper was added to the cellulose factory
– Butcher was expanded to include kebab skewers
– Doner production
– Soup production in Erasco
* The following changes were made:
– Water towers in Helmbergen + Kirchdorf can now be filled
– Petrol stations in Feldkirchen + Grünsdorf can now be filled
– Adjustments to some productions
– Further camps at LU Hof 8
– New village “Seefeld”
* Some changes to the overland deco
* Changes to the deco in cities + villages
* All fields have dirt roads, all forest areas have forest trails
* Dirt roads which also allow “shortening”
* Changes to the yard silos (400,000 capacity, except for yard 7)
* Adjustments to the prices at the points of sale (but these are still not final!)