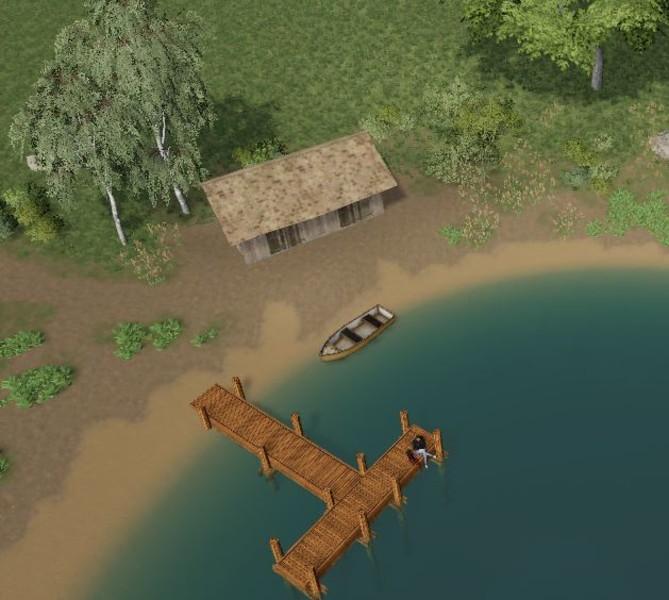 Hereby I put my converted Felsbrunn all available. The farm I put on another terrain
and the stables of the animals are also housed at the farm. Also, I have some small things built in
which you have to explore yourself. The launch vehicles and takeoff fields are also changed. I hope you
like my processed Felsbrunn.Einige open spaces are also available.
I have done my best and the log is up on the bush01 which is a bug from Giants error-free
I do not exclude errors that were not obvious to me. If someone finds fault, please let me know.
I will try to change that.

The PDAMap is drawn by hand because I still can not
was the usual way as from the LS17 which is to find according to instructions from the network to create.
I ask for indulgence.

Version 6.0
1. Compost sign attached in fruit farm.
2. Corrected the placeable information sign, namely that only apples were displayed in the juice production in all juice production.
3. Inserted 2 hotspots for cabbage and lettuce storage areas.
4. At the spinning mill there was a vehicle in a wool pallet. Corrected.
5. Fixed floating trees.
6. Corrected trigger in fruit juice paradise production.
7. The grass texture did not work correctly in landscaping mode and has been fixed.
8. Finer field subdivision was reversed because the tobacco sowing had not been carried out correctly.
9. Partly dirt roads removed.
10. Remove all objects from the farmhouse such as pavilion, table, benches, swings and slide as well as the wall so that you can create and design the area yourself when you have sold all buildings.
11. Seed store, fertilizer store, lime store, liquid fertilizer store and herbicide store set higher so that higher vehicles with trailers underneath fit the store.

Version 4.0 Multifruit
1. All in-game productions built into a farmland which has to be bought in order to produce.
The menu of the factory is only shown when you are in possession and only then can become productive.
2. The fillTypes.xml has been corrected.
3. Collision of the rainwater drainage channel at the horse stable was removed, which resulted from the scaling of the stable and thus got stuck with a vehicle.
4. Fountain city center installed.
5. Unloading trigger of the bakery corrected or relocated so that pallet goods can be unloaded better.
6. Board pallets and empty pallet storage installed.
7. Seed storage, fertilizer storage and lime storage installed.
8. Corrected trigger on fruit farm and Lidl.
9. In the baked goods production and the associated language file, 2 terms water and milk were interchanged. These have been corrected.
10. All triggers revised.
11. Liquid manure storage equipped with digital display.
12. Herbicide storage and liquid fertilizer storage installed.
13. Helicopter landing pad (decoration) installed.
14. Observation platform installed.
15. Installed earth fruit storage.
16. Warehouse and soil storage facility equipped with manual light.
17. Red cabbage and white cabbage production installed.
18. Swimming pool installed.
19. Ice tarpaulin installed and tested.
20. Corrected trigger in dairy, hollow coal production, fabric production and baked goods production / flour delivery.
21. Carrot juice production installed.
22. Only two raw materials were needed for the production of diesel. I changed this so that you only need one raw material to activate the production.
23. White cabbage salad and red cabbage salad production installed.

Version 3.0 Multifruit Trigger Update
1. Who used FS19_AnimalPenExtension had to realize that the installation of the water filling wheel in the stable was not exactly user friendly.
However, this has changed and the water trigger is now out of the stable on the pasture.
2. Sound of the cuckoo quieter.
3. Trigger correction in dairy production fabric production charcoal production.

Version 3.0 Multifruit Update
1. Suspended Stromkasten Hafen Nord corrected.
2. Lack of texture etiketkascheitholz was added.
3. Labels panel sawmill products and raw materials have been swapped and corrected.
4. If the game will be played in English language missings
displayed. These are fixed.
5. If you use the Hotspot Composter, you’re in the composter,
I have also corrected these.
6. Information panels “Sales Offices and Production Boards” changed.
7. Added malt production water and changed raw material options. It
“wheat or barley and water” is needed now, not “wheat and
Barley”.
8. Plates of pallets are exchanged so that now several are produced at once
can be.
9. Corrected grass tarpaulin on silage fermenter.
10. Exchange symbols of the board pallets.
11. All evergreen trees are removed because they also have a canopy in winter
and that does not look realistic. Was criticized by users.
12. Fabric production changed. Raw materials “wool and cotton” became too
“Wool or cotton” as raw materials changed because in winter no
Cotton grows and thus no substances are produced unless
You want to buy them for a lot of money.
13. Completely the original waterfalls removed from the Felsbrunn (because of
Errormmeldungen in the log) and also completely new waterfalls individually new
Imported (about 80-100 imports of their own newly created wasserfall.i3d).
14. Triggers exchanged when Lidl and Raiffeisen.Abladen with a
Autoloadfahrzeug works now perfectly. In the attachment see pictures
15. Added empty pallets for sale at Raiffeisen.
16. Corrected terms in the language file empty palette and rejected item corrected.
17. Partial triggers exchanged because of car upload of pallets.
After a test phase that works fine.
18. Removed collisions on street signs.
19. Added language files in Spanish. Thus, you can play in the game too
Play spanish language. Other languages ​​will follow.

Version 3.0 Multifruit
1. Lidl poster on Lidl has been corrected.
2. Paths of the animals was changed by Mapeigene files on Giantsdateien sodas the APE mod works. Only the stable does not work the APE mod because this is an external horse stable mod.
3. Mist is now displayed in the price list in the menu.
4. unloading point of the potato factory has been corrected.
5. Trainee sound files have been corrected.
6. Built in composting.
7. Map prepared for Season Ready.
8. Potato washer installed.
9. Malt production, fuel production built-in.
10.Sugar built-in.
11. Several buildings built for productions.
12. Manual light installed in RumWhiskyherstellung.
13. Corrections Animated wooden gates pushed into built-in decoration.
14. Many minor details and deco built-in.
15. Unnecessary Specular removed from Map which are no longer needed in LS19 and further various optimizations such as ClipDistancen reduced (sometimes from 1 000000 to 500 set).
16. Beautified trees planted regions.
17. Tipcol the map adapted to the corresponding built-in building sodas snow is not in buildings.
18. Additional sawmill built for production of empty pallets and board pallets.
19. Manure storage Kopostlager and slurry storage installed.
20. Fields adapted or changed.
21. Cardboard production, flour production, barrel production built in and much more.
22. Tobacco textures created and incorporated as a fruit type.
23. Cigarette factory installed.

Versions 2.1
1. Lavender plant removed from the air when washing
2. Grains removed from the straw
3rd train exchanged for diesel locomotive
4. All overhead lines of the train traffic away sodas so you can load and unload the wooden car
5. Hoisting crane installed at the sawmill
6. Hoisting crane installed at railway silo west
7. Overview board Placeable (to be found under Decoration). Thus, everyone can choose the location itself where it should be. The blackboard can be sold and repositioned at any time
become. The blackboard does not cause any daily costs.
8. New varieties of white cabbage, red cabbage and lettuce incorporated.
9. ClipDistances optimized.
10.Are ramps in the fuel refinery lowered (hung slightly in the air).
11. Parking car on open space port / BGA removed.
12.Trees planted.
13.Raiffeisen built on the harbor as a point of sale for many more products and fruit varieties.
14.Dekoration and signs installed.

Version 2.0 MultiFruitUpdate
Sawmill in the sales overview was gone and has been corrected (will be displayed again)

Version 1.2
Garden center (manure and manure sale), fuel production (soybeans, sunflowers and oilseed rape), flour factory (wheat, barley, oats and corn sales), observation tower, WhiskyRum factory (sugar beet and corn sales) and sugar factory (sugar cane and sugar beet sale) built-in. And many small and larger changes in the terrain. Furthermore, signs, signposts and many small details are installed. The forest was also enlarged a bit.
Furthermore, I would like to thank Hasco quite sincerely for a correction of a trigger at the BGA, which was created by Giants. Thus, now the bales sell better at the BGA.